The history of Korean martial arts is as old as the land itself and can be traced as far back as the prehistoric era, where primitive weapons made of wood and stone were used for hunting and fighting. As early as 2707 BC, the Korean warlord Chi-Woo, also known as Jaoji, reigned as the “god of war” in what is now Mainland China.

Since then, the majority of Koreans migrated and settled in the region of the Korean Peninsula, where there have been more than a thousand recorded

instances of foreign invasions. Consequently, the Korean people developed unique martial arts and military strategies in order to defend themselves and their territory.

The development of each of these three branches is briefly described below:

The earliest martial arts developed in Korea are referred to as SahDoh MuSool; meaning tribal, clan, or family martial arts, as this type of martial art was mainly passed down from one generation to the next through family lines.

SahDoh MuSool was popular among the ancient tribes, city-states and smaller kingdoms that formed in the Korean Peninsula and parts of what is now China. This was evident well before the first unified Korean kingdom of Ko-Cho Sun which was founded in 2333 BC by the legendary king, DahnGoon WahngGuhm.

Traditional athletic activities such as Taekkyon, and Ssireum are considered to have originated from SahDoh MuSool. In fact, many techniques found in the popular Olympic sport of TaeKwonDo can also be traced back to SahDoh MuSool.hDoh MuSool was further developed and made widespread by voluntary militias comprised of the common people, who often fought in battles to defend their villages.

Since Buddhism was first introduced to the kingdom of Koguryo in the year 347, a rather unique form of martial arts was developed by both Buddhist monks as well as martial artists, known as BoolKyo MuSool.

Buddhist monks originally developed and then practiced BoolKyo MuSool to improve their health while meditating and to defend themselves while traveling.

As a result, Buddhist martial arts include both internal training, with emphasis on special breathing and meditation methods, as well as external training, with emphasis on extremely effective self-defense techniques. Many Buddhist monks were so accomplished as martial artists that they were occasionally called upon during national emergencies to fight in battles by forming unprecedented armies of warrior monks.

To this day, BoolKyo MuSool plays a significant role for Korean martial artists by providing them with philosophies of non-violence and compassion as well as ethical codes of conduct, such as the famous Five Precepts of the HwaRang warriors.

Kings, royal families and government officials had private armies and bodyguards who practiced a type of martial art known as KoongJoong MuSool.

Existing records in Japan suggest that many KoongJoong MuSool techniques found their way there and gave birth to the Japanese art of Jujitsu.
King JinHung of the Kingdom of Silla encouraged the HwaRang warriors to practice KoongJoong MuSool in addition to their other martial arts training. But later during the Koryo Dynasty and Chosun Dynasty, Korean kings enforced policies to discourage the practice of martial arts and to forbid the possession of weapons, in order to protect themselves from military rebellion or any other political uprising. 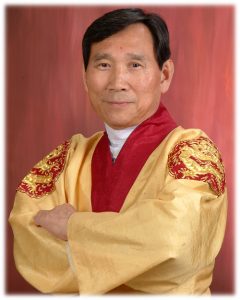 The three branches of traditional Korean martial arts: SahDoh MuSool, BoolKyo MuSool, and KoongJoong MuSool, were organized to form a single system known as Kuk Sool in 1958 by In-hyuk Suh, the founder and Grandmaster of Kuk Sool Won™.

Kuk Sool has countless techniques derived from the three branches of traditional Korean martial arts and is structured to take a practitioner in a logical progression from the beginning all the way up to Master level.

Kuk Sool Won™ has been actively promoted worldwide by the World Kuk Sool Association®, and it is also recognized in the martial arts community as one of the most effective and comprehensive systems of traditional Korean martial arts in existence today.

Many events led up to the formation of the current martial art system known as Kuk Sool Won™, but perhaps the best place to begin would be 1910, with the dissolution of the Korean Royal Court by the occupying Japanese forces. During this period of foreign rule (from 1910 until the end of World War II), the Japanese attempted to suppress virtually every aspect of Korean culture and replace it with their own. They even suppressed Hangul (the Korean language) making Japanese the official spoken language. Needless to say, the traditional martial arts of Korea were also banned.

As a result, many prominent martial art instructors were forced into hiding, including Myung-duk Suh. But before Japan took over, Suh was well-noted for teaching three types of Korean martial arts; kwun sool: a kicking and hard punching style, yoo sool: a soft style with emphasis on joint-locking and throwing techniques, and yoo-kwun sool: a combination of the two which could be either hard or soft but never used force against force.

Many of the martial art techniques native to Korea were jealously guarded and therefore had always been taught in a secretive manner. This aspect became greatly intensified due to the fact that practice of any Korean martial art was strictly forbidden by the Japanese government. In fact, anyone caught teaching them faced severe punishment under an extremely harsh legal system. Because of the severity of this repression, very few Koreans actually participated in martial art activities for fear of reprisal.

Master Instructor Suh Myung-duk was one such patriot, who refused to be intimidated from honoring a family tradition that stretched back sixteen generations. He returned to his hometown near Taegu in Kyung Sang province and set about the task of preserving his vast martial art knowledge. He continued practicing martial arts, teaching his techniques in the strictest privacy to immediate family members. Finally, the time had come to pass along the heritage of the previous 16 generations. Myung-duk Suh carefully selected one child to whom he would give the entire scope of his knowledge. That child was his grandson, In-hyuk Suh, the future founder of Kuk Sool Won™.

A serious martial arts education began for the young Suh when he was only five years old and his training continued uninterrupted until the middle of the Korean conflict, when his grandfather was fatally wounded by North Korean soldiers. It then continued through arrangements made by his grandfather’s foresight. Letters of introduction, plus his grandfather’s reputation as a master instructor of the Korean Royal Court, opened many doors that otherwise would have remained firmly shut. Now the heir to the Suh family’s martial legacy began to visit and to learn from many different instructors, and by the time he was 20 years old, In-hyuk Suh had traveled to hundreds of Buddhist temples and private martial art teachers.
Studying the many aspects of Korean martial arts was no easy task. Buddhist temples are no longer used as martial training grounds, but serve instead as repositories where libraries of many ancient training books lay hidden away. Kept safe in the neutral holy temples, the Japanese were prevented from confiscating or destroying these valuable texts, but Suh had to search out and find volumes that in some cases had been totally forgotten about.

The martial art masters also proved to be somewhat of a challenge. Sometimes a teacher had a wealth of information to impart and yet others might yield only a single but important technique. For instance, Suh learned an important joint locking angle from an old man who was the last descendant of a famous martial arts family. This old man was reputed to use just his thumb in order to break the long Korean smoking pipes made of steel. But he refused to teach the technique, preferring to take it with him to the grave. Suh tried persuading him for nearly an hour before he realized the old man had been holding just such a pipe in one particular position, with his elbow at the same exact angle the entire time. Suddenly, he became aware that the old man had been testing his wisdom and that the secret technique was the elbow angle itself. 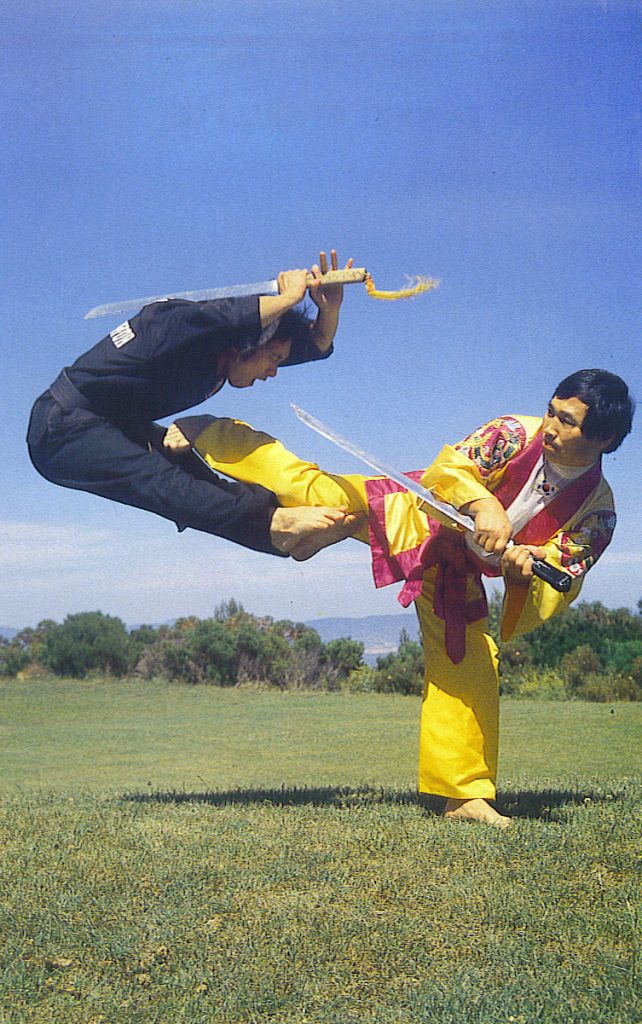 It was now the late 1950′s and In-hyuk Suh had begun the monumental task to organize and formulate the many scattered martial art techniques of Korea into a single system, which he named Kuk Sool. Officially founded as Kuk Sool Won™ in 1961, it is now Korea’s largest organized martial art (while Tae Kwon Do is larger, it is considered by the Korean Government and the World Tae Kwon Do Federation to be a sport based on martial art and not an actual martial art system).

In contrast to other popular martial arts in modern-day Korea, Kuk Sool Won™ uses radically different spinning techniques and low stances. So it took the public some time to adjust, but eventually its popularity grew to epic proportions. Then in 1974, when Kuk Sool Won™ was highly esteemed by the public, In-hyuk Suh took his martial art out of Korea to the United States, forming the World Kuk Sool Association® in 1975.

Originally headquartered at San Francisco, California, the demands of an expanding global presence dictated moving to a more central location, and in 1991 the World Kuk Sool Association® was relocated to Houston, Texas. Presently located in Tomball, an outlying district of Houston, the WKSA® headquarters is equipped with traditional training grounds covering over 20 acres of land.  The facilities include a spacious dojang (training hall), outdoor training area, knife-throwing & sword-cutting areas, three different archery ranges, a meditation center, as well as the capability to practice some of the aforementioned skills from horseback.